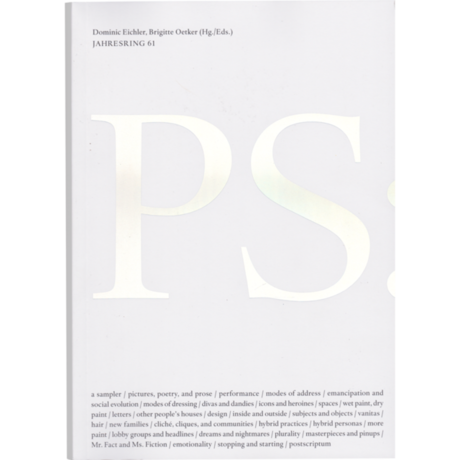 The Jahresring series is on one of the longest continually published annual journals for contemporary art and culture in postwar Germany. We note the continued importance of an ongoing and thought-provoking cultural discussion and recognize what a privilege it ist o take part in and foster such a discussion.
The Jahresring journal entails an experiment and an invitation – one extended to a guest editor who is asked to lend his or her knowledge of a particular theme and ist relevance to a broader cultural issues, and in doing so bearing full responsibility for ist outcome. As such, this journal is inevitably born of debate. As with all healthy dialogues there will be moments of intersection and cognizance of difference. In our view this is an important and fruitful process of taking risks and earnestly exchanging positions.

This volume is inspired by an intertextual and interdisciplinary approach to understanding gender and sexuality. It is one way into a wider conversation on the subject, which entails an emancipatory legacy and a broader ongoing evolution in the West. In the fields of literature, visual arts, music, fashion, and dance, changes in the representation of gender and sexuality have generated and continue to generate intense, impassioned deliberation on a daily basis – and have given rise to some great artistic work.

In present times it is becoming clear that in societies that lack freedom or those exposed to repressive ideologies, this manner of discussion is met almost universally with reactionary hubris. This is additionally often misused to provide a decoy or mask for all manner of horrendous injustices and unconscionable violence. The global ramification is the attendant backlash against or rollback of the incremental, hard won, and far from complete or secure advances in what we consider as universal human rights.

In this complex field of inquiry, instead of relying on generally misunderstood terms – ones that are sometimes maligne das too academic, and that ironically for some will be too worn and for others just red flags, such as „identity politics,“ „feminism,“ „queer,“ „gender studies,“ and even „post-queer“ – this edition takes a different angle. It asserts the importance of forceful personal voices, willfully diverse voices with entirely heterogeneous timbres and forms exploring different subjectivities, each speaking through their particular cultural fields. For some readers, not everything these voices have to say about who we or they are may be completely agreeable. For others, the territory they claim will ring very familiar bells.

There are fruitful contradictions everywhere; there is sometimes a disquieting sense of deciphering secret codes. At the same time, there are also moments of Situationist-like détournement – they reveal the capacity to look elsewhere for good reason. For instance, can we view the lighting apparatus for the Acropolis (ca. 1989) with the same intensity as that historic edifice? A book can be opened, closed, reopened, flipped through, read covert o cover, forgotten, revisited. Meanwhile, let’s not underestimate that this journal is made at a time when more people attempt to stake claims and leave more dissonant digital footprints that ever before. Counterbalanced against this is the fact that the parallel digital world is largely a commerce-dominated space still developing ist own forms and points of sublimation. Cognizant of that cacophony, this journal offers a space of reflection within ist pages.

Underlying ist allowance of the certain discursive turbulence of the „personal as political“ (to use Carol Hanisch’s famous feminist slogan) is not the wish to provoke, but rather a utopian belief in our capacity for imagining freedim expressed as the necessarily continual cultural questioning of norms and attendant policing and presumptions. In that vein, a „PS“ or postscript might be read as a place where intentions are revealed, or entail an acknowledgment of subjectivity or personhood, or of relations or realities not explicitly stated in the main body of any given text, but implicit in or underpinning them. If we can think of text metaphorically, then perhaps we can also think of existing culture or the given conditions of any cultural production as a coauthored text, one that requires and endless number of postscripts. A PS is a place of interpersonal agency: a sometimes compelling textual gesture that might add a „by the way“ and an „also“ and a „you know what we are actually talking about.“ It can be flourish and an open door, and have the energy of an insight arriving in the knick of time. It is a mode that allows the explicity authored afterthought, the possibility to change tack or mode of speech. It is the subjective footnote, the note, or note on a note, a reframing. It isn’t afraid of trumpeting emotionality or even last-minute love. It is self-conscious, an appeal, the expression of desire. It renders the text preceding it a palimpsest, the articulation of the wish for things tob e reconsidered again and again in a new light. It reacts to the supposed authority of the text it appendages, coloring what has already been said. It evidences textual space in something thought of as complete. It might be the e-mail that follows fast on another, or the text message late at night. A PS is of ist nature contextualized and contextualizing. Though it may parade as the last word, it never is.

Accordingly, the sixty-first edition of the Jahresring journal embraces diverse forms and formal possibilities of writing and thinking about contemporary art and culture. It includes a text-based exhibition of excerpts, lectures, experimental scripts, artist interviews and conversations, abstract performative texts transcribed from video work, poetry, short stories, statements of intent, biographical fiction, magazine features, and academic articles interspersed with image-based art works.
The contributors have equally diverse points of departure, interests, and expertise. Among them are visual artists from many generations, choreographers, poets, academics, a haute couture hair artist, two Berlin-based indie-pop icons, a designer, and an activist. Many have in the past or continue to wear different hats in life and cultural production. A certain allowance of slippage, overlap, productive blurring of characters, roles, modes, and disciplines is implicit throughout.

By no means encyclopedic, this journal is alive with voices that champion the possibility of making and expressing difference, sometimes looking back in ordert o look forward, with multifarious subjective positions and tones. Their manner of engagement both directly and implicitly acknowledges a progressive sense of reconsidered selfhood, continually refracted and reconstituted through cultural production.

Our thanks go out to the contributors and the many people who have helped realize this book. In addition, the guest editor wishes to acknowledge that the content brought to this edition of the journal is deeply indebted to years of collaborative work with Michel Ziegler while establishing the Berlin gallery Silberkuppe. It would be unthinkable without the debates that form the basis of that work. One of those conversations has been about the cultural legacies of feminism – thought of not as a historical moment now past or a fixed ideology, but as profoundly valuable ongoing discussions, and an absolutely necessary, active basis for progressive social change. We are both aware that important topics will not always be entirely lacking in contention. We ask culture to hold a mirror not to make a flattering portrait, but to challenge even if we disagree, and to help us renegotiate what might be considered fixed frameworks.

What do we know? What do we have? What do we miss? What do we love? Berlin // Schinkel Pavillion March 24, 2019 7-9pm In conversation with Willem de Rooij; Katharina Fichtner, Cultural Attaché, Embassy of Canada, Berlin; and Monika Szewszcyk
Attention EconomyJahresring 60: Jahrbuch für moderne Kunst Edited by Brigitte Oetker and Nicolaus Schafhausen Interviews with Saâdane Afif, Thomas Bayrle,  ...

What Is Different? is the title of this year's edition of the Jahresring, guest-edited and designed by Wolfgang Tillmans. Since the early 2000s Tillmans has been working on truth study centre, a cycle of works concerned with absolute claims of truth in social and political contexts. Circling around contemporary issues of newly ...

A few things: Some thoughts on meaning, objects and abstraction in the work of Claire Barclay Dominic Eichler Catalogue essay to accompany the exhibition ...
Jan 8, 2016 ... The Serpentine Gallery Poetry Marathon was an ambitious two-day poetry event taking place in London during Frieze Art Fair week and ...
Ming Wong's homage to Pier Paolo Pasolini involved relocating the story of the Italian director's 1968 masterpiece, Teorema, from Milan. By Dominic Eichler ...
Dominic EichlerWritten All Over Us With illustrations by Nairy Baghramian, Julian Göthe, Shahryar Nashat, Henrik Olesen, Danh Vo The whiteness descended ...